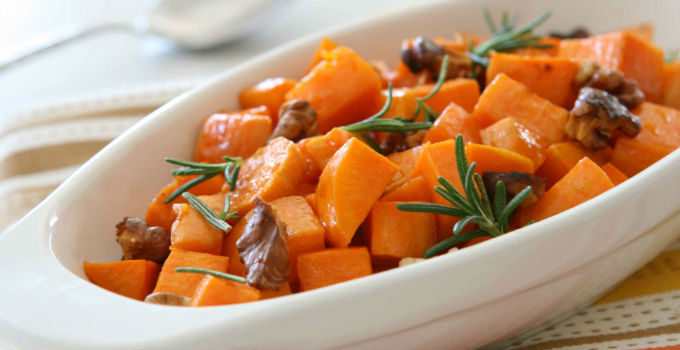 A Candied Yams Recipe is a must at Thanksgiving! Since you just have to mix everything together and stick it in the oven, this couldn’t be more stress-free. My family and I like candied Yams prepared this way, but if you like, marshmallow can be added (see below, on variations).

This recipe, albeit called “yams”, may be prepared with the orange sweet potato. In most parts of North America, sweet potatoes are still often mislabeled as yam. And when Columbus took sweet potato to Spain, they were called simply “potato” until 1740, when they finally made the distinction between both. That’s why it’s so hard to find old sweet potato recipes. What we call yams in America is a softer variety of sweet potatoes. The real yams, that come from Asia or Africa, are drier and starchier. So if you are going to prepare this recipe anywhere other than America, I suggest you do it with sweet potatoes.

This candied yams recipe is so simple and delicious you’ll never go back to canned yams again!

This site uses Akismet to reduce spam. Learn how your comment data is processed.

GREAT NEWS: the store is ready!! Woo Hoo! Just ONE product for now, as I did exactly 5 years ago starting this Blog with only ONE recipe. It will grow, with your help! Enjoy! 🙂

We all have some great things to share. Let's do it!